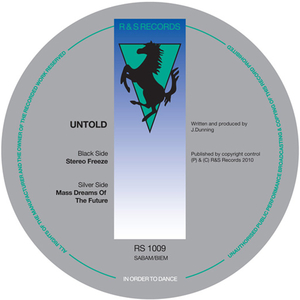 Untold is one of the leading lights of the UK dubstep scene, his Hemlock label continues to blur the boundaries between, dubstep, house and techno and also provides a home for likeminded souls James Blake and Ramadanman.
When not running and recording for Hemlock he also records for Hessle and Hotflush, remixes for the likes of Planet Mu and Bpitch, and also has a debut album on the horizon.
His music makes total sense on R&S, taking inspiration from the classic house, techno, jungle and rave that made the label what it is. Put this all together with the finesse and skill of one of the most hyped UK producers around and it’s a no brainer that it’s another essential slab of wax from the truly back on form label.
‘Stereo Freeze’ is aimed directly at the dancefloor and updates the classic Detroit electro sound for 2010. It’s going to unite the old school R&S heads who can file it with their dusty Dopplereffekt and Model 500 vinyl, and the young enthusiasts who have discovered the label through James Blake and Pariah. Play Loud!
‘Mass Dreams Of The Future’ mixes muted rave stabs and more electro basslines over some shuffling future house beats and deft sub bass, and perfectly accompanies the lairier a-side.
With both producer and label having the utmost respect for each other, this was always going to be a release worth waiting for.