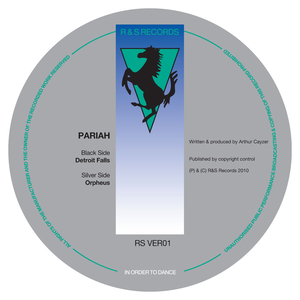 A - Detroit Falls
B - Orpheus

Debut single for hotly tipped London based producer Pariah on the legendary R&S record label.
Pariah is a precocious young talent. Part of the same London bass music scene that has spawned the likes of Burial, Bullion, James Blake, Pangaea and Untold, and part of wider loosely knit scene that includes futuristic, electronic beatsmiths such as Flying Lotus, Hudson Mohawke, Rustie, Falty DL etc.
Already an in demand remixer before the release of this debut single. He has remixed current media darlings The XX (Basic Space – easy the best mix of the bunch), Brit winner Ellie Goulding (Under The Sheets), Bombay Bicycle Club (Always Like This) and might have had a hand in a certain Erykah Badu bootleg doing the rounds.
The two tracks on this debut single were the his first ever finished productions and snapped up by R&S under the noses of a whole bunch of interested high profile labels. They continue the R&S tradition of releasing forward thinking electronic music, and follow the lineage of Aphex Twin, Model 500, Patrick Pulsinger and Derrick May.
• The two tracks on this single wear the influences on their sleeve, referencing the hip hop beat collages of Dilla and the moody atmospheric 2 step rhythms of Burial, but still contain the rich Pariah DNA which will be even more apparent on his future R&S singles. The stuff we have heard so far has blown our socks off taking influences from sources as diverse as Levon Vincent, Fennesz and classic Detroit techno as well as the likes of MJ Cole and Steve Gurley.
Already a name on the lips of the hip blog crowd (featured on Pitchfork, Gorilla Vs Bear, No Pain In Pop and Rcrd Lbl) and in demand on the European underground DJ circuit this debut 10” is likely to become a collectors item and catapult him onto much bigger things.

Unfortunately at this time we can't offer all the Pariah - Detroit Falls tracks as individual flacs, as some of these tracks exceed the shops maximum (16.6666666666667mins) download length.

These longer flac tracks are available in the full album download.

Unfortunately at this time we can't offer all the Pariah - Detroit Falls tracks as individual flacs, as some of these tracks exceed the shops maximum (16.6666666666667mins) download length.

These longer flac tracks are available in the full album download.